It's getting more and more exciting to see the way the New Light community is forming. We've had this little influx of new people lately - 8 newcomers, all in their 20's, most of them invited by a friend. Most of them are already well connected into the community. Last night we had our monthly community gathering at our house - a yummy potluck dinner followed by conversation and worship. It was great to have the full community together.
Some of the things we've been up to:

Four of us, a group which we're calling the Leadership Community, have been meeting weekly to develop a strategic plan and a discipleship system. We recently finalized some statements that articulate our Core Values, which we're pretty excited about...
Core Values:
So, please keep the New Light community in your prayers! It really feels like God is doing some exciting things among us!
Posted by Allen Ewing-Merrill at 10:08 PM No comments: 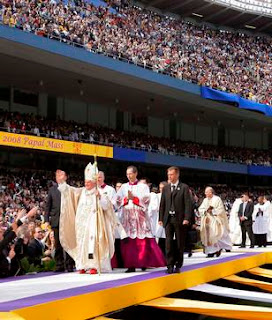 I'm finding the reporting of the Pope's visit to the United States to be very interesting, and a bit puzzling. Today's Portland Press Herald features a front-page story about the Pope praying at Ground Zero and leading mass at Yankee Stadium. On one hand, I think it's really good to see this level of enthusiasm for something of a spiritual nature. I mean, how often does a religious leader, other than the likes of Billy Graham, draw crowds enough to pack Yankee Stadium? (Well, I suppose Joel Osteen does it every week, but I'll save that for another post...) On the other hand, though, it seems to me there's something just a little off when it's a human being that draws all the attention, rather than the One whom we worship.
A quote from today's article:

He could only see the top of the pope mobile.

"It was enough," Urban said. "He's the head of our church. It's probably as close as I'm going to get to him, but that's fine."

Does this strike anyone else as a bit odd? Isn't Jesus Christ the head of the church?
I really don't mean offense to my Roman Catholic sisters and brothers. I have incredible respect for the rich tradition of the Catholic Church, and I think there are many, many things to celebrate about Roman Catholicism (as well as a few things to critique, such as their refusal to ordain women, which is also a topic for another post...). However, the whole mystique about the person of the Pope is one part I just don't get.
Posted by Allen Ewing-Merrill at 12:53 PM 1 comment: 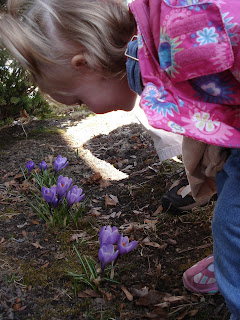 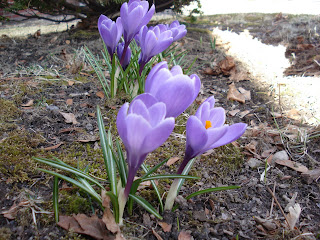 Winter doesn't let go easily here in Maine! Finally the crocuses are in bloom, and finally... finally... finally... the last little strip of snow along the sidewalk in front of our house has disappeared!
Is it possible that spring has finally sprung? Or am I just ensuring, by saying this, that we’re in for another storm before winter finally releases its grip?
Posted by Allen Ewing-Merrill at 10:27 PM No comments:

Back from the Walk to Emmaus

I spent Thursday-Sunday serving on the team for Crossroads Emmaus Men's Walk # 41, Walk to Emmaus, at Singing Hills Conference Center in Plainfield, NH. I am feeling renewed in spirit, spiritually strengthened, and somewhat sleep-deprived.

I've been thinking about a few highlights of the weekend which intensify my confidence in the way God uses the Walk to Emmaus as one tool in transforming lives:

Have you been on the Walk to Emmaus? If so, what would you add to the list?

Rachel has a really bad cold today. It started on Saturday and Sunday, when she was just kind of lethargic. Monday she slept until 9:00 and stayed home from daycare with a congested cough. Today she has a full-blown cold: her nose is running constantly, she's sneezing a lot, and we have to keep wiping the boogers out of her nose and off her little friend Dodo. She's spent a good part of the day in tears... Any little thing is traumatic.
Poor Rachel. I'd much rather have the cold myself (and give me a day or two... I well may!) than to watch my little girl be so miserable.
Posted by Allen Ewing-Merrill at 4:31 PM 3 comments: