When will it all melt? 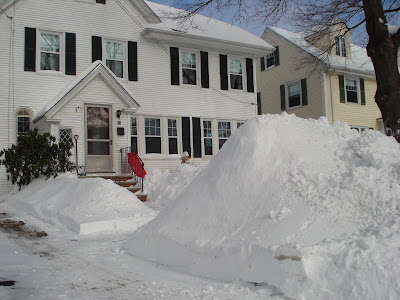 I like snow as much as anyone, but it's March, and there is something wrong with this picture...

The crown of thorns in the manger 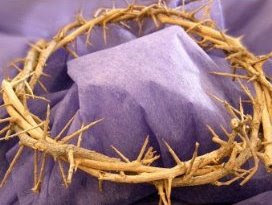 In preparation for worship during this Season of Lent, we recently ordered a crown of thorns to be used as part of our worship space.

Last week, upon returning home after picking Rachel up from daycare, we found a box at the door, and sure enough, it was straight from Holy Land Imports.

At two-and-a-half going on three, Rachel is super excited whenever there's a package at the door, and it's hard for her two-and-a-half-year-old brain to comprehend that it could be a package addressed to someone other than her. So I explained, "No, this isn't a package from Nana and Papa or Grammy Jeanne and Grampa Bud. This is a package for Mommy and Daddy." Well, of course, she wanted to see what was inside, so I continued, "This is something very special," and with that, I pried open the box to reveal its contents.

"This is a crown of thorns," I explained. "Jesus wore one of these on his head when he was on the cross." Okay, this is way too much, I'm thinking, but how do I explain this? By now she's grabbing at it, because it is, after all, a package that arrived at our door, and packages contain treasures to be enjoyed. "It's very, very sharp," I said, and I had her touch one of the thorns, gently, with her little finger so she'd understand. "You have to be very careful when touching this."

"Jesus wore it?" she asked, understandably puzzled. And then, imagination running, putting it all together in her mind, she continued, in her little sing-songy two-and-a-half-year-old voice, "Now I go put it in the manger, and Baby Jesus will be there, and Mary will be there, and Joseph will be there..."

It makes me think about how often we parcel these stories out, keeping them separate, protected from one another. Anyone knows Baby Jesus, with his beautifully laundered swaddling clothes, his disinfected manger, and his mother Mary dressed in light blue, belong to Christmas, where the star shines bright and the angels sing good news. The crown of thorns, though... the cross... the angry crowds... the darkness... well, these belong to Good Friday. Let's not be confused.

Maybe, just maybe, Rachel is starting to understand a connection we'd rather ignore: Birth, life, witness, pain, death, resurrection -- one great story, one Jesus Christ, one life, one Savior, the foundations of one faith.

A crown of thorns in the manger, Baby Jesus, Mary, Joseph, and all -- not a bad idea.
Posted by Allen Ewing-Merrill at 10:39 PM 1 comment: