If you want to see me get all worked up, talk to me about how we in the church need to take care of ourselves before we can begin to look outward.

This happened recently, at a meeting of interfaith leaders in the area. I facilitate this group which gathers monthly, along with leaders from some social service agencies, to talk about ways to build community and strengthen families. We were brainstorming possible community outreach projects which might present opportunities for collaboration among faith communities -- things like occasional neighborhood dinners to which we'd invite our neighbors -- and one of my colleagues spoke up. I'm sure he had no idea he was about to push one of my buttons:

Oh man. I wanted to jump across the table. My first thought: Does this guy read the same Gospels I read? Are we following the same Jesus? Something here does not compute.

I spoke up, more with passion than with substance, letting him know that I totally disagreed with what he'd just said. I think it surprised him.

But really, isn't this why so many of our churches are struggling, or worse, on the edge of closing their doors -- because we've lost our bearings -- because we've become little more than social clubs whose primary purpose is institutional maintenance? What's up with this logic? Does anybody really believe that somehow, when we've taken care of all of our own needs, when the institution is finally running like a well-oiled machine, when we've focused inwardly long enough, that then we'll magically have the resources of time and money and skills to begin looking outward to care for needs beyond the walls of our church? Does anybody really believe this?

Before we moved to Portland, I served a church that had bounced back in a pretty dramatic way from a place of dismal decline. Once strong, over the course of decades the church had declined, not unlike thousands of other mainline Protestant churches in cities and towns across the U.S. Worship attendance was such that they'd move out of the sanctuary in the winter, into a small adjacent meeting room because (a) they couldn't afford to heat the big, beautiful sanctuary; and (b) they were small enough that they could. Their focus was inward. Morale was low. They wondered how long they'd survive.

But then over the course of ten or fifteen years, this congregation experienced dramatic change. Worship attendance began to grow... and grow... and grow... from a low of 40-something, I'm told, to something close to 300 fifteen years later. The church came alive with children, youth, and adults of all ages. A growing spiritual vitality manifested itself in diverse programs of mission and ministry that enlivened the church and impacted the community in profound ways. By all accounts, this church had experienced revitalization -- new life!

I remember being in a meeting where the pastor from another church was asking questions, trying to understand the factors that had led to such dramatic change. One of the church leaders whom I respected tremendously -- someone who'd grown up in the church and experienced the changes firsthand -- described it this way: "We used to be a church that looked inward. We were most concerned that the bills were paid, and when money was tight, we worked harder to balance the budget. All of our efforts went into trying to keep this church afloat." (How many churches could describe themselves this way?) "But then one day, a newcomer to the church stood up during the sharing of joys and concerns, and through tears, she shared her struggle. She had a parent back in Brazil who was dying, and she was desperate to make it home to see this parent before it was too late. It was hard for her to ask, but she wondered if there was anyone who might be able to help her financially."

This church leader described that as the pivotal moment. Presented with a challenge, they began to understand that they could help a sister in need. The tearful concern of an immigrant in their midst grabbed their hearts and took precedent over a balanced church budget. They began to work together to meet the need of the newcomer, and this need became their rallying cry. When they were able to raise enough funds to send this person to Brazil to see a dying parent, they realized God could use them for powerful things.

"Our focus changed, from inward to outward," said this church leader, "and that made all the difference. It was the beginning of a totally different focus for this church, and once we began looking outward, we've never stopped."

By now, of course, very few in the congregation could even remember this event, because the congregation had grown so dramatically. Certainly there were many factors that led to this church's revitalization, but the point was clear: When the focus is outward, some of the inward things begin to take care of themselves.
Posted by Allen Ewing-Merrill at 3:15 PM 1 comment:

No church at that address... 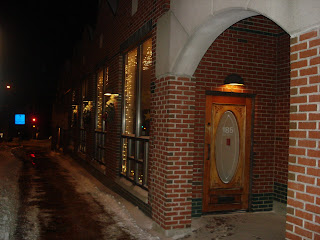 Two months after my last post, I'm going to try my best to dig this thing out of the annals of inactive blogs...

Wow, so much has happened -- I can't possibly reflect on all that's happened -- but suffice it to say that this is an exciting season. We are closing in on the final pieces of the renovations to the new facility we purchased last fall. As of this coming Sunday, March 1st, we'll be celebrating worship in our new space at 185 High Street -- a space we've named Hope.Gate.Way.
It's a little 2,800 square foot facility which we've renovated so there's a good-sized room for worship and other larger gatherings, an office, a small open gathering space, two kids' rooms, a kitchen, and two bathrooms. As one of the units on the ground level of a parking garage, surrounded by an architect's office, some Maine Medical Center patient billing offices, and a recording studio, it looks nothing like a traditional church -- which we think may well be more an asset than a deficit. It has four large banks of windows overlooking High Street -- a street with lots of foot and car traffic -- giving it high visibility. And it's adjacent to Parkside neighborhood, the most densely populated square mile in Northern New England -- a neighborhood with many, many opportunities to be in mission and ministry. We are so excited about this new facility... excited about the renovations that are nearly complete, which are transforming the facility into a beautiful, inviting space... excited about partnerships we've begun to develop with neighboring churches and community organizations, which are already bearing fruit... excited about the vision for ministry that's emerging as we prepare to move into the neighborhood.
So today I got a call on the church cell phone -- an out-of-state number I didn't recognize. "Um, hello?" the voice on the other end began, tentatively. "What city are you in?"
"Portland, Maine," I said.
"Okay... [long pause] ... Uhh, I have a driver trying to deliver a dishwasher, and I've got you listed for 185 High Street, but my driver says he just drove by that location and there's no church at that address."
No church at that address. Wrong.
I wanted to launch into, "The church is not a building, the church is not a steeple, the church is not a resting place, the church is a people..."
But I didn't. Instead I said something more like, "Okay, well tell your driver to go back, because while it definitely does not look like a traditional church, that is our space, and that is our dishwasher."
It's amazing to me how deeply held are these ideas about what a church might look like -- so deeply held that this driver, pulling up at 185 High Street (which does, by the way, have a very large sign in the window announcing, 'Coming soon: Chestnut United Methodist Church & New Light..."), wouldn't even get out of his delivery truck, open the door, and check to see if he had the right address. Nope, one quick glance and he drew the conclusion: no church at that address.
Makes me wonder: Where is the church, anyway, and what qualifies? I've visited lots of imposing church facilities with the requisite stained glass windows and a steeple visible for miles around, and after spending time within those doors, I'd be inclined to make the assessment, "No church at that address." And I've spent the last 18 months serving a church that meets every Sunday morning in borrowed space -- an aging synagogue, badly in need of a facelift, hard to find, without so much as a sign to mark its presence -- and another community of faith meeting around dining room tables and in living rooms in homes around the city -- and in both cases, I'm more than ready to make the assessment, "However odd the address, this is church."
It's clear to me: the Body of Christ cannot be contained within four walls, and defining the church has nothing to do with bricks and mortar, or stained glass, or steeples... but rather, everything to do with the Spirit at work among its people.
I can't wait to see all the ways "church" will manifest itself as we begin this new journey. My message to those who will gather on Sunday morning and Sunday evening: "Welcome to our new home for worship and ministry. Let’s make ourselves at home, but let’s not get too comfortable: this is a launching pad to send us out as disciples in mission and ministry to our city and the world."
Now that's church.
Posted by Allen Ewing-Merrill at 11:09 PM 3 comments: