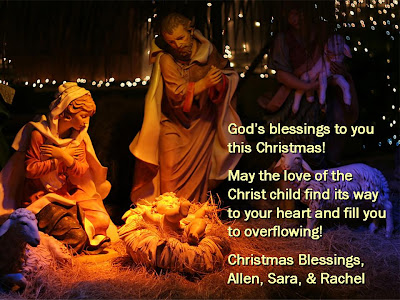 Posted by Allen Ewing-Merrill at 3:32 PM No comments:

Yesterday we had a great time caroling at Monument Square and handing out free hot chocolate and coffee. We also handed out lots of cards inviting people to our outdoor Christmas Eve "Under the Night Sky" worship celebration at Post Office Park. It was a great afternoon, and we even got an interview and several minutes of footage on the Channel 8 news at 6:00 and 11:00! Best of all, they promoted our Christmas Eve celebration.

Tonight should be awesome!

Merry Christmas, everyone!
Posted by Allen Ewing-Merrill at 3:29 PM 3 comments:

If you're trapped inside on this Third Sunday of Advent due to the snowstorm, like we are, take a few minutes to enjoy this video.

Posted by Allen Ewing-Merrill at 2:12 PM No comments:

In Search of Our Kneeling Places

In each heart lies a Bethlehem,
an inn where we must ultimately answer
whether there is room or not.
When we are Bethlehem-bound
we experience our own advent in his.
When we are Bethlehem-bound
we can no longer look the other way
conveniently not seeing stars
not hearing angel voices.
We can no longer excuse ourselves by busily
tending our sheep or our kingdoms.

This Advent let’s go to Bethlehem
and see this thing that the Lord has made known to us.
In the midst of shopping sprees
let’s ponder in our hearts the Gift of Gifts.
Through the tinsel
let’s look for the gold of the Christmas Star.
In the excitement and confusion, in the merry chaos,
let’s listen for the brush of angels’ wings.
This Advent, let’s go to Bethlehem
and find our kneeling places.

— Ann Weems, from Kneeling in Bethlehem
(Philadelpha: The Westminster Press, 1980)
Posted by Allen Ewing-Merrill at 11:23 AM No comments:

Our Logo has arrived!

After weeks of working with a designer, the logo for our new community of faith has arrived! What do you think?
We're so excited about the way this community is developing. We meet weekly on Thursday evenings at our house for dinner, conversation, prayer, and sharing, with about a dozen adults and a couple of kids. There's lots of excitement as we begin this journey together! We have a few exciting things planned for the days leading up to Christmas: an afternoon of Christmas caroling and a reading of the Christmas Story at Monument Square, in the heart of the city of Portland, next Sunday afternoon; and an outdoor "Under the Night Sky" Christmas Eve worship celebration at 5:30 pm at Post Office Park, a beautiful spot in the Old Port with lots and lots of lighted trees, a gathering area with park benches, street lamps, and brick walkways.
Check out our New Light blog to read more about what we're doing, and to read our daily Advent devotional reflections, too.
We're supposed to have a Christmas Open House here at our home tomorrow afternoon, for both the New Light and Chestnut UMC congregations. Our house is all decorated, the tree is twinkling in the corner, and the Christmas cookies are waiting, but the weather isn't cooperating very well. Looks like there's a doozy of a storm heading this way that's going to dump 8 inches of snow, mixing with sleet and freezing rain on Sunday afternoon. We may have to postpone the Open House, which would be a major bummer...
Posted by Allen Ewing-Merrill at 9:33 AM 4 comments:

In a post called “Attract” young clergy? Andrew Conard of Thoughts of Resurrection responds to this article on attracting young clergy for The United Methodist Church.

What do you think?
Posted by Allen Ewing-Merrill at 8:43 PM 2 comments:

In a new blog called Third and Goal, Dan Elmore asks the question, "To guarantee, or not to guarantee?" Check it out. Guaranteed appointments... What do you think?
Posted by Allen Ewing-Merrill at 8:23 PM No comments:

Jesus and the World

Check out this excellent blog post, Jesus & The World, on the implications of the Incarnation for our walk with Christ, by Presbyterian pastor Jan Edmiston of A Church for Starving Artists.
Posted by Allen Ewing-Merrill at 12:07 AM 1 comment:

The Stuff of Ministry

We had a good time at the District Clergy Christmas Gathering in Exeter, NH today. The gathering began with worship and Communion, continued with a time of sharing and a Yankee Swap gift exchange, and concluded with a nice chili & soup lunch catered by the folks of the Exeter church. We really appreciated the childcare provided for this event, which makes it so much easier for those of us who are clergy couples who are parenting small children to participate. I came home with a Matthew Fox book on prayer, and Sara with a peppermint scented candle -- typical Yankee swap gifts! It's always good to share fellowship with colleagues: to break bread together, to hear stories, to know that we are connected through the covenant that we share as United Methodist pastors.

Plans are coming along for our Christmas Eve celebrations... more on that once all the final details are in place... but it's very exciting!

Tomorrow our District Superintent, Mike Davis, is meeting with our Staff-Parish Relations Committee, and then he'll come over to our house to meet with us following. We're looking forward to sharing with him some of the progress we're making toward establishing this new community of faith, New Light! We're having lunch with a young couple -- both in seminary, newly married -- who are feeling called to church planting and co-pastoring. It'll be great to share experiences and ideas!

Ministry in this season and this setting is filling me with such joy!
Posted by Allen Ewing-Merrill at 11:33 PM No comments:

What Would Jesus Buy?

This evening, our plans changed unexpectedly, and we didn't end up needing to go where we thought we had to go. Since our friend Erica had agreed to stay with Rachel for a while, Sara and I took the opportunity to go to a movie we've been wanting to see.

It's this interesting movie that someone told us about, playing right now at the little alternative theater in the Old Port, called "What Would Jesus Buy?" The movie tells the story of Rev. Billy and the Church of Stop Shopping.

Odd: I guess that's the best way to describe the flim. And it was even odder for us, because after the first half hour of the 90-minute movie, all of a sudden the picture was upside down and backward on the screen, and the voices were all speaking backward. Sara and I looked at each other with puzzled expressions, but the movie was odd enough that we initially thought this was just part of the oddity. Soon it became apparent to everyone, though, that something was very wrong. Then the lights came on, and someone stepped out of the projection room to state the obvious: one of the reels of the movie was backward. It would require some work to splice the reels together correctly, but that couldn't happen until the movie was ended. We had two choices: we could wait it out (15 minutes, he estimated) until that reel was finished, and then the rest of the movie would be okay, but we'd miss that 20 minutes or so... or they'd give us a free pass to come back another time. We decided to opt for the latter.

So we only saw the first third of the movie, and I'm not sure I'd rank it as a must-see, but there were some take-aways:

I really appreciate the film's message about the dangers of consumerism -- it's a message I think our society needs to hear, and for that I applaud Rev. Billy and his "congregation," if that's what you can call them. But honestly, this guy is just so outrageous -- the stereotypical televangelist of the worst kind, complete with bleached blonde preacher's hair, the soapbox hell-and-damnation preaching style, and the theatrical "Stop Shopping Gospel Choir" -- that I don't know how anyone can take his message seriously.

It's too bad, because I think the movie's title asks an important question: What would Jesus buy? And why do we celebrate his birthday -- the birthday of one who said, "Take only one tunic for the road," and "Drop your nets and follow me" -- the one who was homeless but who offers the gift of abundant life -- with such excessive spending and overconsumption?

For me, though, the movie (at least the part we got to see) failed because it highlighted the sensational personality of a crazy nut with an important mission and a style that was more off-putting than convicting.

Have you seen this film? Am I missing something? Please tell me... I'm hoping the final 2/3 of the movie, right side up and forward, might have been a little less outrageous and a little more compelling...

Posted by Allen Ewing-Merrill at 11:48 PM No comments:

Today's Advent devotional reflection on our New Light blog features a really cool video from a worship media production house called The Work of the People. Check it out.
Posted by Allen Ewing-Merrill at 9:49 AM No comments:

Today's Advent devotional reflection, written by my wife, Sara, on our New Light blog...
Posted by Allen Ewing-Merrill at 12:30 PM No comments:

I recently came across this great list -- 10 Tips for a Simpler, More Meaningful Christmas -- from a nonprofit organization called Alternatives for Simple Living. Good stuff!
Posted by Allen Ewing-Merrill at 12:14 AM No comments:

As part of her Advent spiritual practice, my wife, Sara, is posting an Advent devotional reflection on our New Light blog each day during this season. 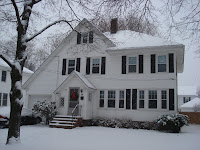 Here in Maine we're getting hit with a full day of snow, and there's nothing better, in my mind, to usher us into the Christmas spirit! I love a good snow storm, especially for its power to stop us in our tracks and force us to enjoy a change of pace.
We're using the day to finish decorating our house for Christmas, including putting up our Christmas tree... and when that's done, we're going to tackle our home office, which is in desperate need of a good overhaul!
But first, it's time to start shoveling!
Posted by Allen Ewing-Merrill at 12:05 PM 1 comment: