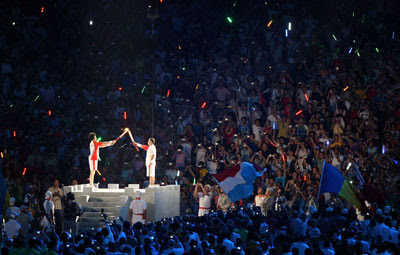 I'm watching the Opening Ceremonies for the 2008 Summer Olympics, and I'm overwhelmed, as I am every time this comes around, by the beauty of the whole thing. Sara commented, "This is so amazing! There is nothing else like this in the world."

True, isn't it? For me, the Olympics represent a wonderful hope for peace and a spirit of unity as sisters and brothers from countries that span the planet gather to celebrate what's best about humanity. Some will leave with medals and others without, but what matters most is not who wins the Gold, the Silver, or the Bronze, but rather the ideals of peace and harmony and the realization that there is a oneness that runs so much deeper than any differences in language, dress, color, religion, or culture.
Have you seen the Visa commercials? I wish they weren't for Visa, but the message is wonderful. In the voice of Morgan Freeman (ironically, recovering right now from a serious car accident): “There are six billion of us. We all come from unique places, with unique ways of looking at the world. We don’t always agree but for a few shining weeks we set it all aside. We come together to stand and cheer and celebrate as one. We forget all the things that make us different and remember all the things that make us the same. GO WORLD."
Go World. That will be my prayer during the days ahead, and long after the 2008 Summer Olympics have come and gone.
Posted by Allen Ewing-Merrill at 8:46 PM 3 comments: 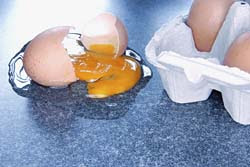 This morning, I was cooking some eggs, when two-year-old Rachel decided to reach up and grab the carton from the counter.

I was looking the other way when I heard the telltale sound: eggs cracking on the floor.
I turned around, and there stood Rachel, frozen, staring at that upended carton and six broken eggs, spreading out in a yellowy, oozing mess. The world stood still as she and I both assessed the damage, and the look of shock and panic on her face spoke volumes: she knew she had done something terribly wrong.
"It's okay, Rachel -- you made a mistake, but we'll clean it up," I said, wrapping my arms around her in a big Daddy hug. And at that moment, she and I both learned something about God's grace.
Posted by Allen Ewing-Merrill at 11:42 PM No comments:

Yesterday we participated in worship at HopeSpring in Winter Garden, FL -- originally a new church start that began as a daughter church of St. Luke's United Methodist Church in Orlando, now considered an extension campus of St. Luke's. That may sound like an insignificant distinction, but actually it represents a huge and challenging change in identity for the people of HopeSpring, resulting from concerns about sustainability based on projections for worship attendance and financial solvency.

Our visit to HopeSpring provided some helpful learning:

Posted by Allen Ewing-Merrill at 4:36 PM No comments:

Wow! Today was the best day by far. Honestly, some parts of the School of Congregational Development have been a bit disappointing, because I feel like a lot of what we're receiving is based on an older model of congregational development that isn't likely to engage younger generations or those in progressive cultures like Portland -- but today was really good.

First, we heard from Carol Howard Merritt, a young Presbyterian pastor from Washington, D.C. and author of The Tribal Church: Ministering to the Missing Generation. She started out by telling a story about one of her parishioners, a member of the church council (or whatever they call the governing board in Presbyterian churches) who arrived late for a meeting, apologized for her tardiness, and explained that she'd run into a friend on the way there. When it accidentally slipped out that she was on her way to church, she'd felt the need to explain... to clarify... "No! It's not what you think it is! My church isn't like that!" And Carol confessed she finds herself doing the same thing, all the time, when people learn that she's a pastor.

Oh, man! Does that sound familiar?!

"Yes, I'm a pastor, but it's not like that! My church isn't what you think it is. We believe in peace and work for justice, and we don't reduce faith to moralisms, and we aren't homophobic or sexist or narrow-minded, and we don't think you have to be a Republican to follow Jesus!"

Yes, all too familiar!

"Church can be very scary," Carol says. "If you go to church and you still dare to admit it, you have some explaining to do."

As a young adult in ministry (although getting less young all the time, I must confess: I turn 38 tomorrow!), I found it fascinating to hear Carol's presentation. So much of it rang true, from my experience, both personally and with others from my generation. A few things to hold onto:

And then from Marcia McFee, the coolest stuff ever about music and worship! If I had come just for this seminar, it would have been worth it. Just a few snippets, because it's late and I'm tired:

In some spare time this afternoon, we made Erica take the Myers-Briggs test, and learned that she's an ISFJ. Sara is an INFJ, and I'm an ENFP.

Carlie (a fellow ENFP) shared this blog post (ignore the title and subtitle of the blog) that shares prayers for each Myers-Briggs type. They're pretty funny.

What are your Myers-Briggs letters? Don't know? Take the test here.
Posted by Allen Ewing-Merrill at 1:36 PM No comments:

Greetings from steamy Orlando -- day two of the School of Congregational Development.

The day began with Mark Beeson, senior pastor of Granger Community Church in Granger, Indiana, whose talk was called "Innovate or Die." His presentation was very inspiring. A few nuggets:

I'm a little confused about Granger Community Church, though. Apparently they're a United Methodist congregation -- at least that's how they were presented today -- but I get conflicting information when I do a Google search. Their own website says "nondenominational." What's the deal?

I went to two excellent seminars: "Creating a Discipleship System," with Claudia Lavy (formerly of Ginghamsburg Church, now part of the consulting team Deepening Your Effectiveness); and "Leadership in the Wesleyan Spirit" with Lovett Weems of the Lewis Center for Church Leadership. Both were very helpful.

A few nuggets from Lavy:

A few nuggets from Weems: