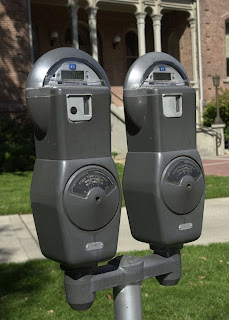 Saturday morning was so awesome. We got together with a bunch of people from the New Light community and just had a blast blessing the City of Portland.

We had a little over $100 in quarters -- money we'd received in a special offering for this purpose at our Beach Worship gathering a couple of weeks ago and then changed into quarters -- and we split up into small groups and just totally went wild, stuffing parking meters, leaving quarters on flat surfaces (window ledges, the edge of parking meters and pay phones), intentionally dropping quarters on the sidewalk as we walked, and giving them away to anyone who asked for change. We also had 200 coupons for free coffee at Coffee By Design, which we gave away, along with a business card-sized card about New Light. After a while we met up again and made a little scene standing on the sidewalk, blowing bubbles... It was our own little version of the Lawrence Welk set, right there on Congress Street.
A few memorable moments...

It's unanimous: our first Random Acts of Kindness was a blast, and we have to do it again!

Posted by Allen Ewing-Merrill at 10:41 PM

Hey Alan - this sounds REALLY cool - I have to figure out a way to do this at our church in Ohio!