A chicken in every yard 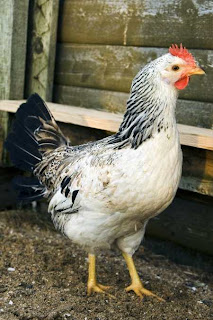 An article in today's Portland Press Herald reports that our neighbors in Falmouth are considering a change to town zoning ordinances to allow the raising of chickens in all residential neighborhoods. No roosters. No slaughtering poultry in the backyard. Coops of a reasonable size (less than 100 square feet isn't bad) and set back 20 feet from all property lines. But chickens and eggs in the backyard, thanks to the Dyhrberg family, who wanted to have a closer relationship to the source of the food on their table. Talk about eating local -- right from the backyard!
Several months ago, our friend Erica had this weird, but reportedly quite vivid, dream that Sara and I had started raising chickens in our kitchen closet. Apparently Sara was excited about the venture, exclaiming, "Now I'll never have to wonder where my eggs come from again!" Erica reports that I was less enthusiastic. Okay, I was rolling my eyes, disgusted. Clearly, Erica knows me too well.
But now, it turns out, maybe Erica's dream was prophetic. Because, who knows? Maybe Portland's next, and if so, I feel a coop coming on.
Posted by Allen Ewing-Merrill at 11:11 PM

Awesome! If you need any pointers just let me know. We love our chickens!