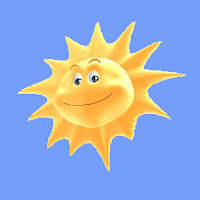 The sun is shining, and I hardly recognize it.
During the month of June, we got measurable rain 21 of 30 days. Portland had 8.56 inches. According to the weather service, the normal June rainfall is 3.28 inches. So far, July isn't looking so good either. Everyone and everything is soggy.
On Friday, during a brief break in the rain, Sara, Rachel, and I went strawberry picking -- something we like to do every June. It was so sad to walk up and down the rows of strawberry plants, seeing soggy, rotting, and molding berries lying on the ground everywhere. We did manage to pick quite a few, despite the challenging conditions, but there's no question: this year's crop is suffering.
Yesterday we spent the Fourth of July at the rustic camp on Center Pond that's been a center of family summer fun since my grandparents bought it when my Mom was a teenager. It rained the entire time. Once in a while, there would be a little teaser -- a brief glimpse of lighter gray on the horizon, and someone would say, "I think it's starting to break across the lake" -- just in time for the next wave of torrential rain. My brother and sister and I used to spend lots and lots of time at Camp when we were growing up, including the Fourth of July most years. I don't ever remember a Fourth quite as bleak as this one.
And yes, it looks like still more rain in the forecast for the week ahead, with maybe, just maybe, a change in weather patterns for the end of the week.
For most of us, it's just a nuisance or maybe a minor inconvenience. It seems important to pray, though, people for whom too much rain can mean floods and great loss, for farmers who are finding their crops are rotting in the fields, and for all who depend on outside work for their livelihood.
Meanwhile, let's pray also for those who are in places of drought, whose lives are equally impacted.
If it's okay with you, I think while I'm offering this prayer, I'm going to head back outside, while there's still a glimpse of blue and that bright round orb is still up in the sky.
Posted by Allen Ewing-Merrill at 1:26 PM

The weather at Camp may have been grim, but it definitely did not "dampen" our spirits.