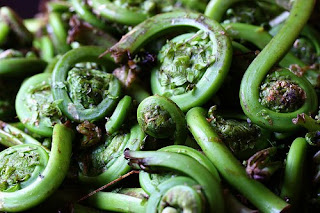 In honor of Sara's mother's arrival on Saturday evening, we made a classic Maine dinner: baked stuffed haddock, thanks to a trip to Free Range Fish and Lobster on Commercial Street; purple mashed potatoes that came from the Wednesday farmers' market at Monument Square; and fiddleheads that we bought out of someone's trunk on the side of the road Friday afternoon.

Yes, fiddleheads - a Maine tradition! Not quite Maine lobster, but almost as popular with some people! Here's what VeganYumYum has to say about fiddleheads:

Fiddlehead ferns are one of spring’s most elusive goodies. The are available for about three weeks in May (as in right this second), and are generally harvested in the northeastern United States. A fiddlehead is the tip of an unfurling Ostrich Fern frond, quickly snapped off with the flick of the wrist by professional foragers in the wild. If you see some growing in the woods near you, take care. There are many other ferns that resemble the Ostrich Fern, some of which are considered to be carcinogenic, like the Bracken Fern. Unless you have a guide with you, leave the collecting to the professionals and pick some up at Whole Foods. They cost $6 a pound in Boston.

Their flavor is mild, and perhaps most closely resembles asparagus, and asparagus is the best substitute for the ferns. Some also say they are similar to green beans and
artichokes. They are pleasently crunchy with a nutty, slightly bitter bite, which is why you’ll see so many fiddlehead recipes calling for butter and salt. Treat the fiddleheads like asparagus tips and you can’t go wrong. If you really want a treat, serve them up with some morel mushrooms; their season coincides almost exactly with the ferns and they pair well.

I wish I liked fiddleheads more. They're okay, but I'm not one of those people you'll find scouring the sides of roads this time of year. But then again, they're only available during a short window of time each year, and once a year is just about perfect for me...
Posted by Allen Ewing-Merrill at 7:15 AM

Fiddleheads...YUM! Your post just awakened a whole bunch of memories for me. Searching for fiddleheads in the woods with my grandmother, bringing them home to clean and cook and eating them with lots of butter and salt! Since I probably won't find any on the side of the road here in CT, I'll have to pay a visit to our local Whole Foods.... but there really is nothing like fresh fiddleheads.

I must admit I've lived here 21 years without EVER eating them!